Gary Fisher is “one of the inventors of the modern mountain bike” 1), and a founder of “MountainBikes, the first company to specialize in the manufacture of [mt. bikes]” 2). Gary Fisher, Charlie Kelly and Tom Ritchey were perhaps the Beatles of Mountain Bikes 3); ground zero for endless innovation and the crafting of enduring bicycle masterpieces.

Gary Fisher is a polarizing figure in mountain bike history, perhaps due to a larger-than-life personality. His controversial claims to have invented the mountain bike, despite not having his own name appear on any bicycle before 1984 4) , are backed up by his truly foundational roles:

Gary Fisher deserves much credit for the existence of mountain bikes, as long we remember all of the others who also created the first bikes as part of the Marin mt. bike revolution, such as Alan Bonds, Joe Breeze, Charlie Kelly and Tom Ritchey - and everyone else honored in the Mountain Bike Hall of Fame. 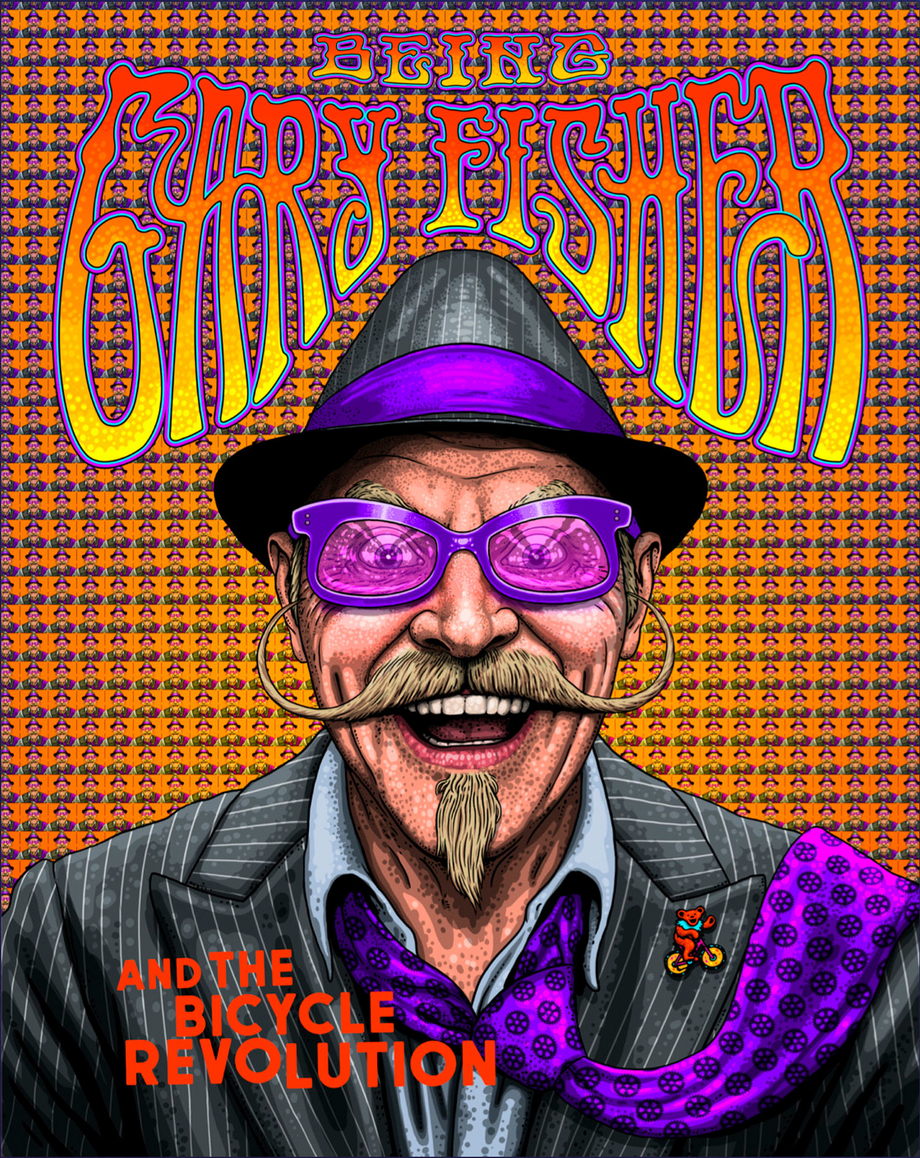 The Montare 11) was sold in 1983 using a head badge of “Montare MountainBikes” with no mention of Gary Fisher. Both Fisher AND Ritchey sold identical Montare models with different stickers. Ritchey Montares were sold only in Canada and were distributed by Rocky Mountain. Both variants sold well and helped to get Fisher's business out of its inherited debt. Ritchey and Fisher maintained some sort of business relationship through 1983 and probably into 1984. This was likely the terms of debt redemption as K&F owed Ritchey for 100's of unpaid frames. See Dissolution.

Fisher Bike would continue to produce the Montare until 2011, which was the last year that a Fisher logo'd bike would be sold by Trek 12). From 2012 until 2017, Trek produced a Gary Fisher signature line, where Gary's smaller signature was applied by the seat tube on to Trek designed bikes. 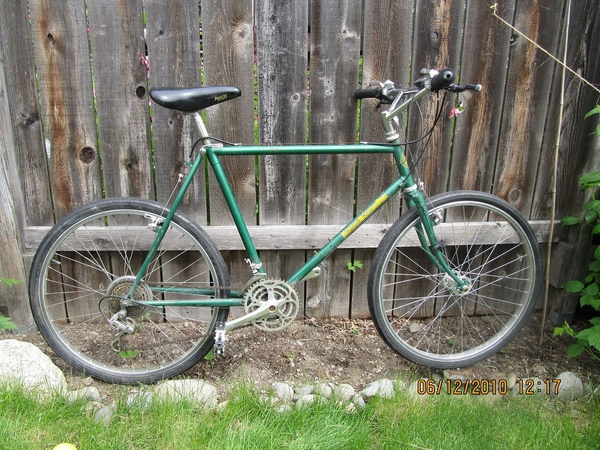 The Fisher MountainBikes logo first appeared in 1984 on the Montare, Mt. Tam and Competition 13). Mt. Tams were fillet brazed by Tom Teesdale. 14) 15) 16) Fisher naming overlapped with Ritchey as they both continued to use the names: Mt. Tam, Competition, McKinley and Everest. Fisher did this presumably to cash in on Ritchey's good brand quality and to preserve the branding which Fisher spent so much time developing. 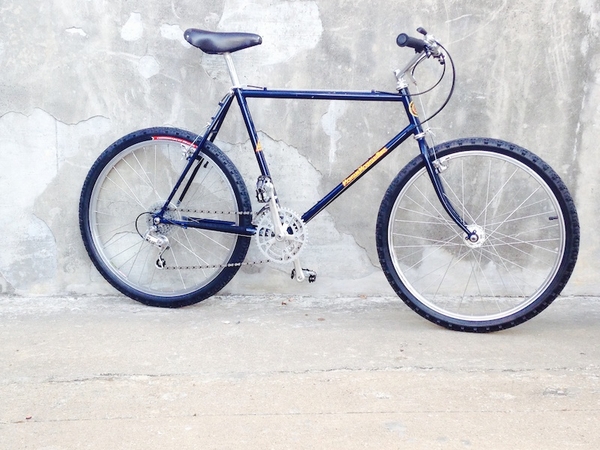 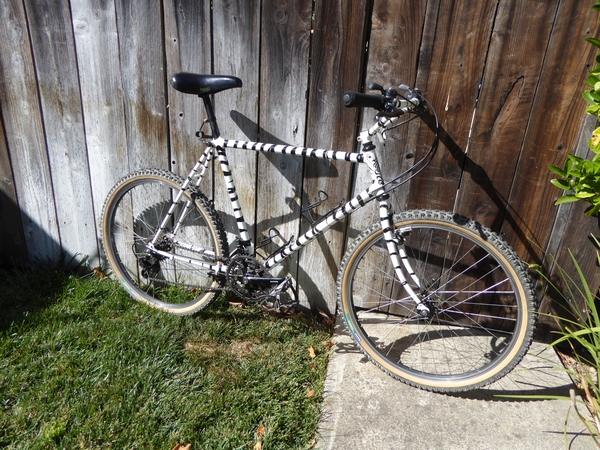 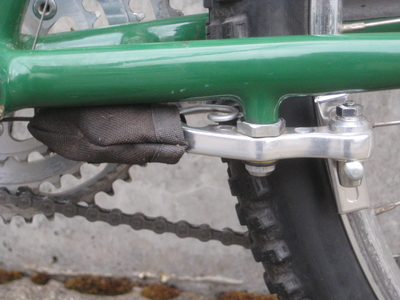 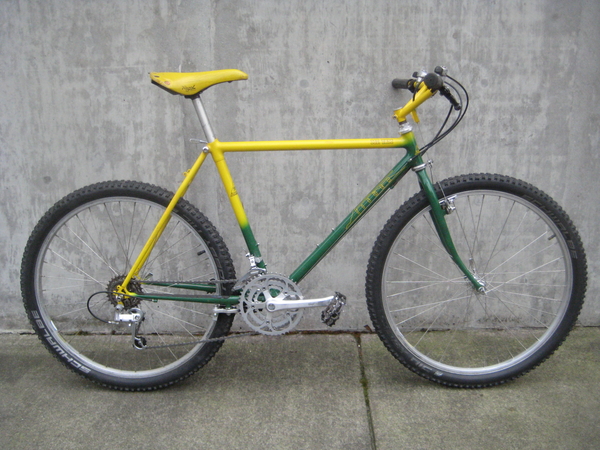 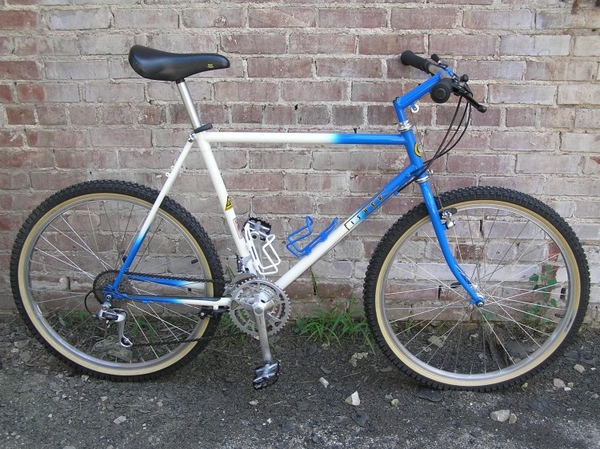 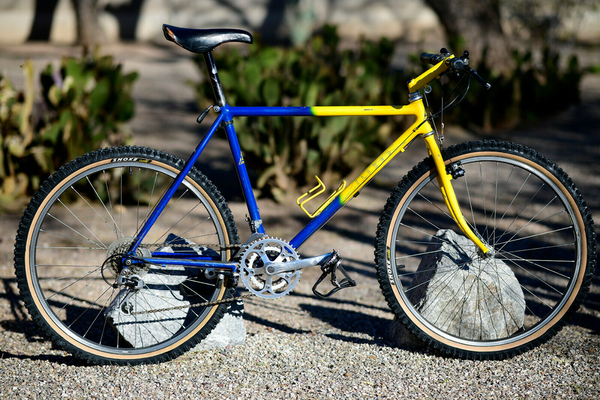 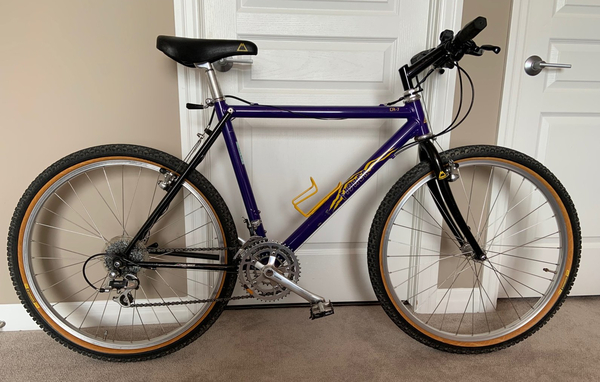 Almost all SunTour XC Comp, except for the rear XT derailleur (1989). Perhaps original? The Supercaliber first appeared in the 1990 catalog.

As spec'd it was supposed to have a full Campy Centaur gruppo w/no Shimano. This example is full XT M735 with a Shimano disc front and a Hope rear. Four pivots. Front air-oil damping, elastometer rears. Despite its name, the RS-1 did not use Rockshox RS-1's20) Note the very early use of disc brakes, using Hope disc brakes 21) and their matching hubs. 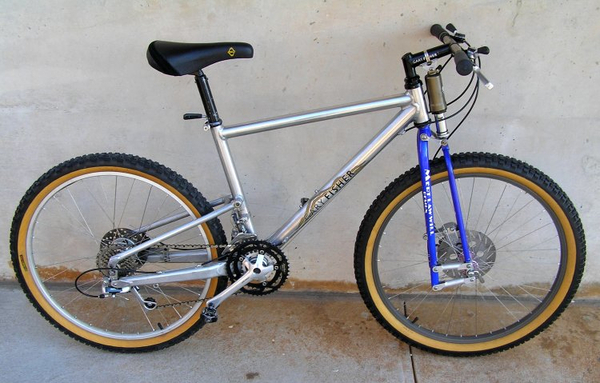 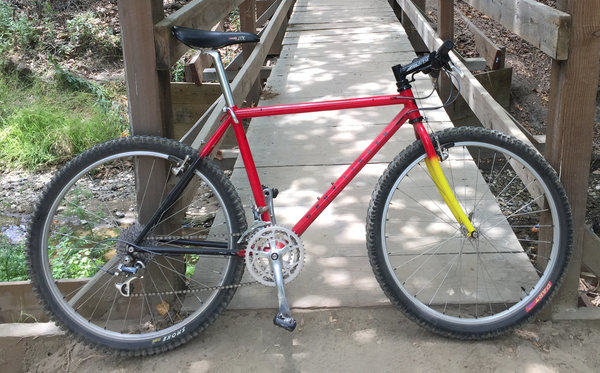 Kelly, Fisher and Ritchey never clearly distinguished their brands, as their business started without planning and continued with that strategy until they separated. A brand history:

There were never any “Kelly-Fisher” decals. Just the Ritchey name with “MountainBikes” superimposed. The “Kelly Fisher” idea was to move into components and other areas unrelated to the Ritchey frames, but there were other issues that prevented that. Charlie Kelly, posting in mtbr 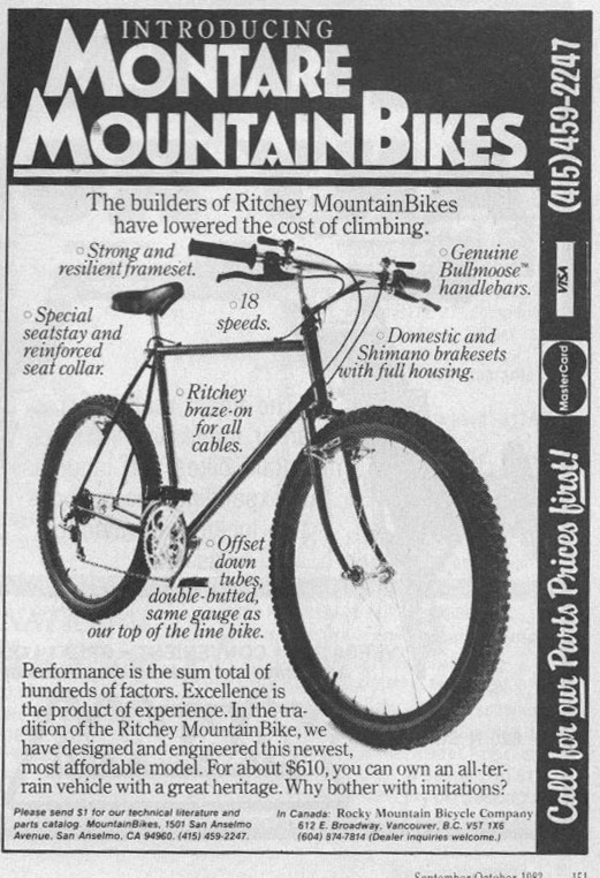 The breakup of the Kelly-Fisher-Ritchey partnership occurred during the summer of 198324), over cash flow issues and future directions on how to mass produce bikes from Japan. Charlie Kelly's take on how K&F MountainBikes ended:

To say we had a business plan would be an insult to real business plans. Gary and I had no proper lines of authority for making decisions. There was no agreement on how we planned to share profits, if there were any, or what we expected to be paid. By 1983 our debt to Tom [Ritchey] was in the neighborhood of $60,000. Everyone involved started to get nervous. To be sure, [Tom] would have no trouble selling them himself, but if he cut us off he would be out a significant sum. None of us was sleeping well. It stopped being fun because I knew that Gary and I would argue over something. Charlie Kelly, Fat Tire Flyer, chapter 21.

My relationship with Tom Ritchey began to fall apart right from the first trip to Japan 25). During that trip it became very clear that he didn't want the same things I did. I wanted complete bikes. All he wanted was a new set of lugs so we could build cheaper frames. … [aspersions about fraud omitted] … Things went south very quickly after that. Gary Fisher, Being Gary Fisher, page 146

Separately, the Ritchey and Fisher brands took off after this point. Ritchey continues today as an independent bike and component maker. Fisher Bikes was acquired by Anlen of Taiwan in 1991. Fisher comments on his time with Anlen:

I was basically a puppet president. It was nuts. A lot of stuff went on unbeknownst to me. It was totally frustrating watching something we built for all those years just get crushed in a lot of ways.“ Gary Fisher, quoted in: bmxmuseum

18 months later, in 1993, Fisher was rescued by Trek where the brand thrived until 2011, at which point Gary Fisher's name was reduced to a small signature decal on a dwindling number of bikes until 2017. 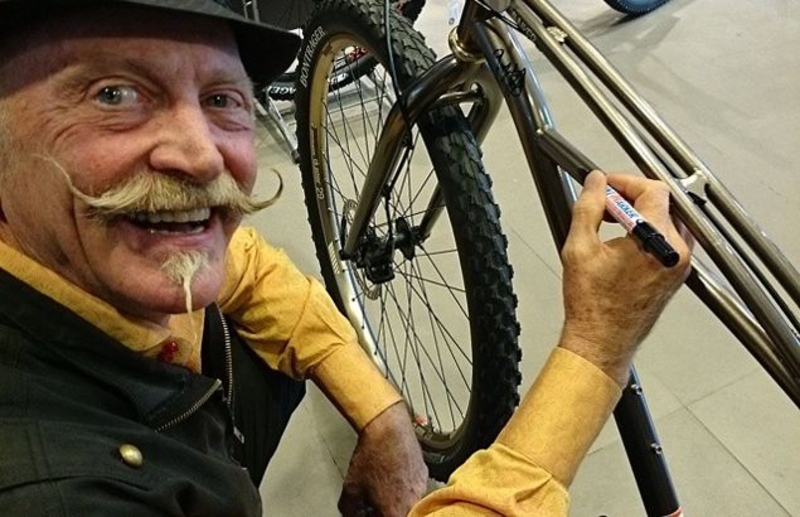 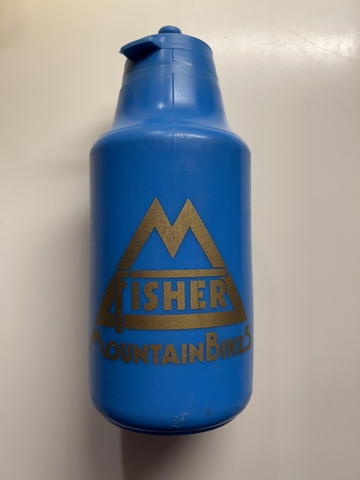 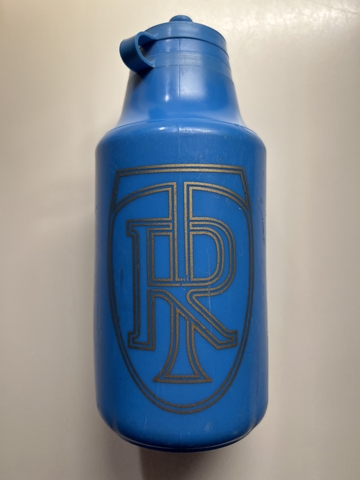 Where does this dual-branded water bottle fit into the timeline?
personal mtbtimeline collection

1)
Wikipedia is correct on this score: wikipedia
2)
Wikipedia again - however, it also states that he coined the term “mountain bike.” A more entertaining story is the one about Wing Bamboo coming up with the name: independent.com. See again: wikipedia
3)
This metaphor gets a bit tortured when you try to figure out who's Ringo or Lennon, or maybe Yoko Ono.
4)
This date is disputed by Being Gary Fisher. This issue will be fully explored below.
5)
Fat Tire Flyer: amazon, chapter 5
6)
The first geared klunkers were created by Russ Mahon of Cupertino Charles Kelly's Repack website
7)
Fat Tire Flyer: amazon, chapter 6
8)
Gary says he coined the term “Mountain Bike.” As always, the truth is actually stranger than Gary's fiction: Wing Bamboo footnote
9) , 10)
Fat Tire Flyer: amazon, chapter 14
11)
Spanish for “I will ride”
12)
See archive of all Trek models by year: trek archives
13)
See full specs on all 1984→1993 Fisher bikes at: mombat
14)
His frames were usually marked with TT or TET. See bikeforums
15)
Tom Teesdale deserves a page of his own. See obituary: redkiteprayer
16)
Prior to 1983, ALL frames came from Tom Ritchey. This is contrary to Gary Fisher's recounting of events in various places. Kelly, ever the reliable chronicler, states that “Tom's bikes were the only ones we sold.” See: Fat Tire Flyer, page 170. After 1983, Fisher sourced complete bikes from Japan plus high end custom bikes from local frame builders, such as Tom Teesdale and Brent Steelman.
17)
From Tom Teesdale's personal Fisher wholesale parts list: oldschoolracing
18)
Gary Fisher confirmed that this specific frame was made by Tom Teesdale on facebook
19)
The cover apparently didn't do very much. See: info
20)
However, the 1990 prototype RS-1 did use the RS-1 front shocks. See: mbaction
21)
Hope discs have a spiral pattern of holes, while Pro-Stops, used on later RS-1's, used a slot pattern of rotor cooling.
22)
The inventor of the Lawwill Pro-Cruiser
23)
Note that this issue also lists Ritchey bikes being sold at the old K&F address, while Fisher MountainBikes (one word) now has a new address
24)
CK writes in mtbr: “I left the company around June, 1983.” mtbr
25)
Fisher states he made seven trips to Japan in 1981 alone, which might explain K&F's huge debt. This trip with Ritchey to Japan likely occurred early in 1983.
fisher/start.txt · Last modified: 2022/10/27 12:26 by mtbtimeline