Tom Ritchey, started building frames in 1972, aged 151), in Menlo Park, CA and raced them successfully until retiring from racing in 1976. By 1974, during his senior year in high school, he had finished nearly 200 frames. He continued building over road 200 frames per year until 1980, when he switched to mainly producing mountain bikes. By this time, he had already made 1,500 road frames.

Starting 1981, Tom produced between 400 and 700 frames per year until the early 1990's and continues to make small quantities of frames to this day.

I try not to be one off and fancy. There's an awful lot of art going on. And, there's nothing against art. Especially if it's functional. But far as advancing… Tom Ritchey, during a frame building workshop, 2016, thebicycleacademy 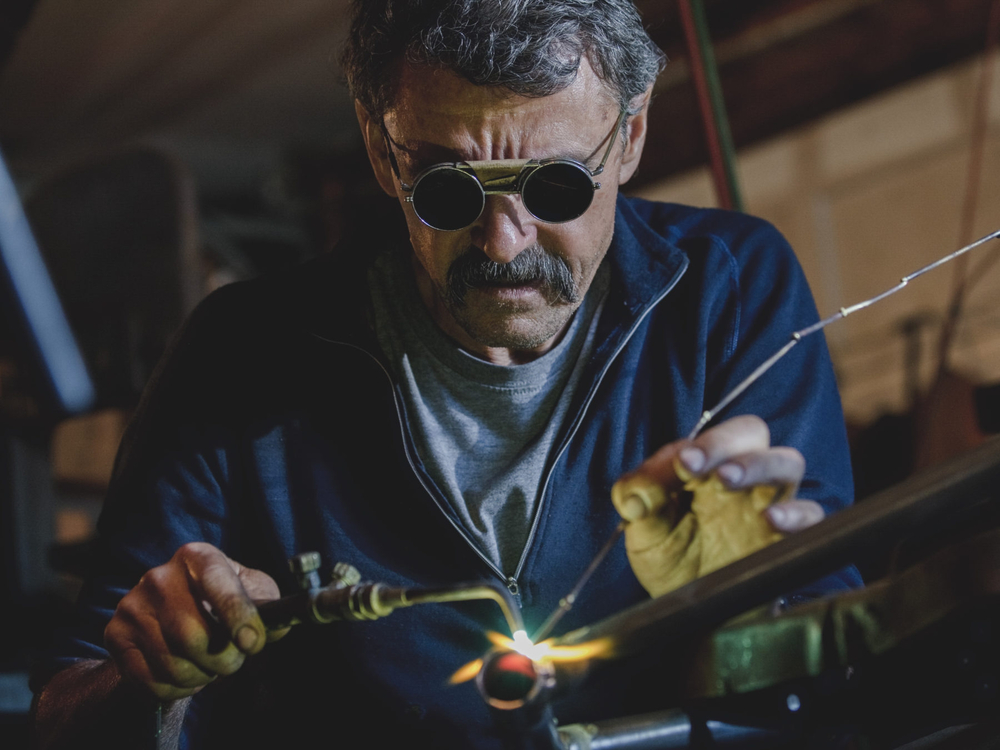 The Master. One Ride Away

Starting in 1977, at the insistence of John Finley Scott, Ritchey made a few off-road 650b off-road bikes. 2). Perhaps ahead of their time, 650b rims were popular with touring bikes, but there weren't enough tire and rim choices. When Araya produced strong, light-weight, 26“ aluminum rims starting in 19803) for the BMX market, the 26” future for mountain bikes was set.

In 1978, Joe Breeze met with Ritchey a number of times to order a tandem bicycle and brought his JBX1. Ritchey admired it and told Breeze he wanted to duplicate it. Soon after, at Breeze's suggestion, Gary Fisher got in touch with Ritchey to order a couple of frames. 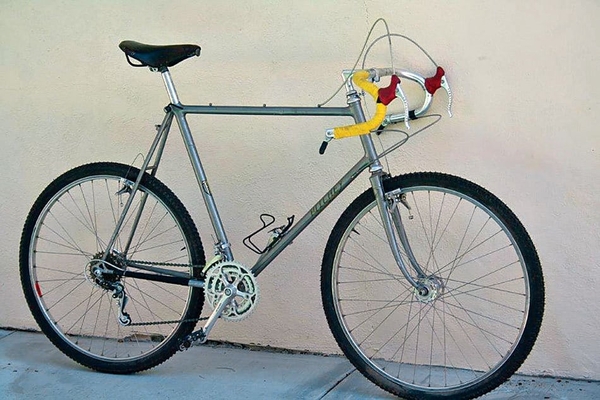 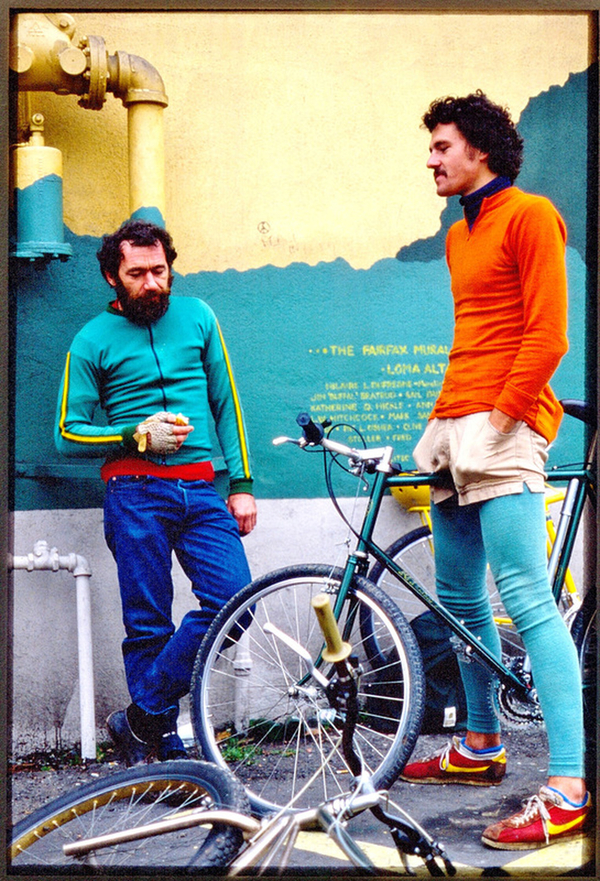 The Birth of the Mountain Bike

In February of 1979 4), after racing his first Repack on a Breezer Series I, Tom Ritchey built three bike frames and forks. One was for Gary Fisher, one for James MacWay and one he kept for himself 5) . His design succeeded and would be the first bicycle to be called a “mountain bike”6) The quality of his fillet brazed frames, forks and “bullmoose” handlebars he invented have rarely been equaled. Indeed, he later took fillet brazing to a sublime level of art with his stunning Annapurna in 1984. His hand made frames continue to be the gold standard of quality even today.

In the summer of 1979, Gary Fisher and Charlie Kelly partnered to buy more Ritchey frames, built them up with hard to find components and sold them as under the “Ritchey MountainBike” livery. During the rest of 1979, Tom went on to make 40 more mountain bike frames 7). 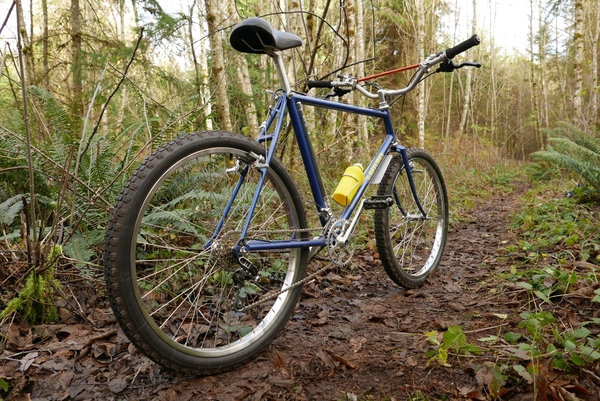 It should be stressed that mountain bikes did not grow out of the BMX market, but rather they came from klunkers which borrowed from BMX, road, cruisers and motorcycling components. Soon, components were created just for mountain biking, such as the 1982 SunTour MounTech, the first mountain bike derailleur. This was soon followed by Shimano's excellent, and very pretty 1983 XT (M700).

The 1980 aluminum Araya 7x rim came just at the right moment, chopping many pounds off of the old klunkers with steel rims. Ritcheys used higher quality Ukai rims, with welded joints, which otherwise had the same specs as the Araya.

Ukai was Ritchey's choice. |Worth Point

John Finley Scott, owner of the Cupertino Bike Shop , ordered 110 frames in 1979 from Tom for $19,0008) . Many of these sat in a chicken coop on Scott's property for years. Some these rusting relics have yet to be finished 9) . His infusion of capital into Tom's business, plus another $10k10) in the same year to Fisher/Kelly, was just what was needed to sustain the industry. Other people were also making “all terrain bicycles,” but the Ritchey frames, with Kelly & Fisher building and promoting them, were the true genesis of the mountain bike. 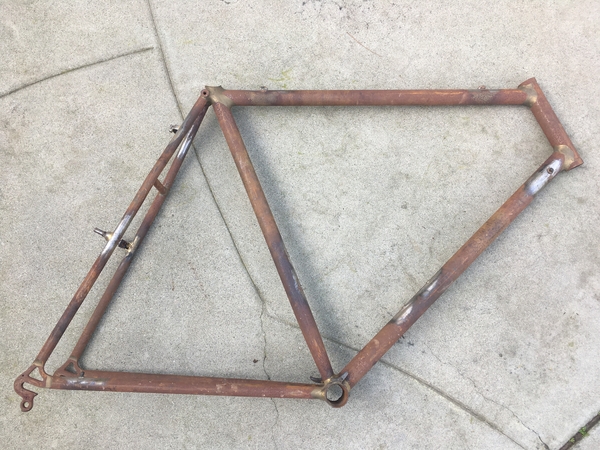 Most sources (Berto, SFO Museum, MMBHoF, etc.) date this example as February 1979, the date Tom first delivered a mountain bike to Gary Fisher. However, Tom himself states that he built this bike to the right in December 1978. 11) 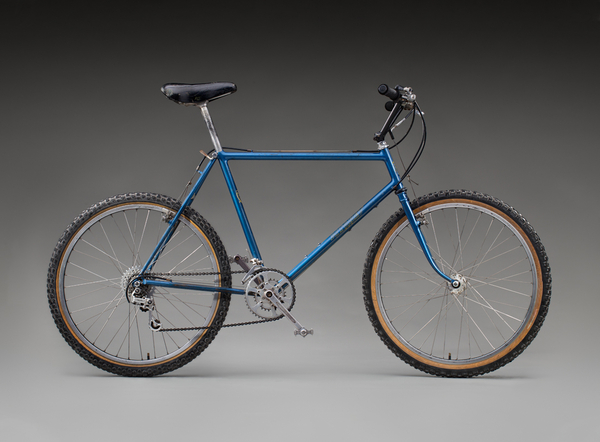 The origin of the species sfomuseum

MountainBikes offered a single, customizable frame choice for the first few years, with a variety of available components. 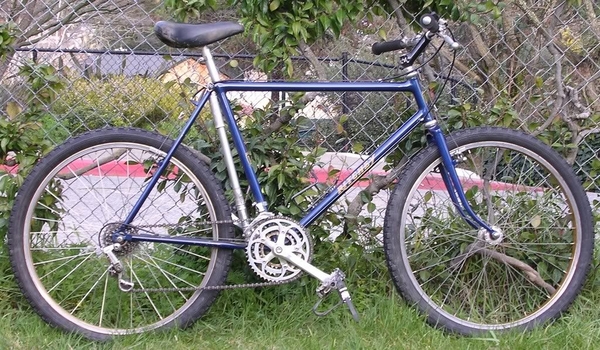 posted by Charlie Kelly to mtbr

I have no problem acknowledging the many riders who went off road before I ever rode a bicycle. But until the Ritchey MountainBike appeared on the market in 1979, you would have had to make your own. There was nothing on earth like the MountainBike for sale to the public, and a few years later, half the bikes sold worldwide were copied directly from it.Charlie Kelly,singletrackworld 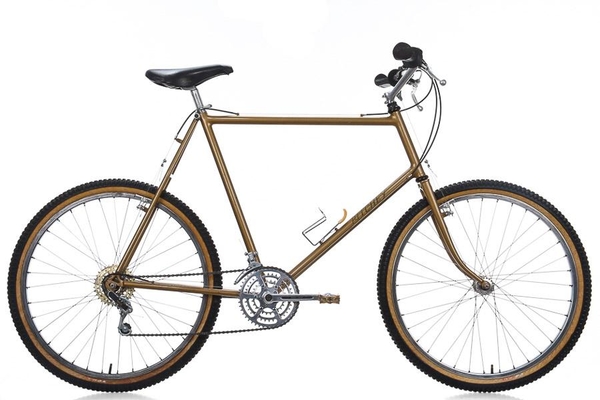 This is built with the “economical” MountainBikes II frameset, which cost $544 in the 1982 catalog, where the higher end MountainBikes I frameset cost $845 at the same time. There are no model names at this time. SunTour Cyclone GT (1976-83) front and rear, 15 speeds, TIG welded bullmoose bars, 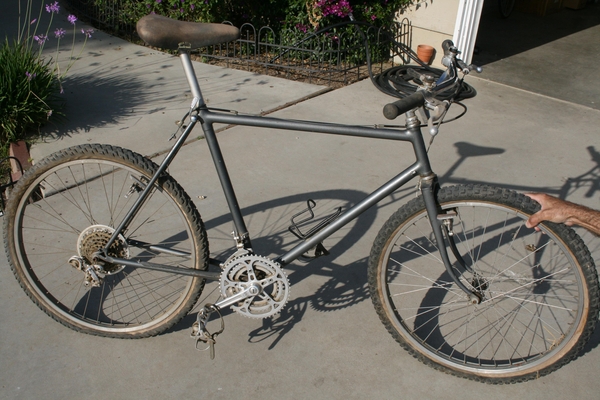 In 1982, MountainBike branched out into four models: Everest, McKinley, Tamalpais & Sierra. The bikes were roughly the same, with different component groups, or Nitto handlebars instead of Ritchey, etc. There were two frames offered: MountainBikes I & MountainBikes II, which were the same weight, but the I frame was customizable. 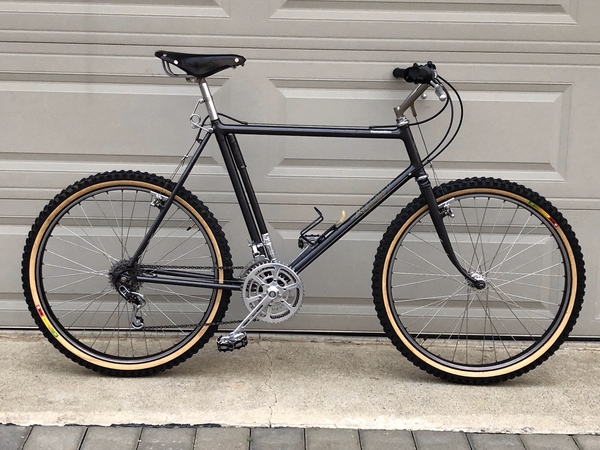 In 1983, Ritchey/Kelly/Fisher split up the MountainBikes company and Ritchey Bikes no longer carried the MountainBikes sticker 12) . Ritchey continued to sell some frames to Gary Fisher, which were labeled as “Fisher MountainBikes.” Ritchey developed a new sales network, including Rocky Mountain in Canada which resold “mass produced” Japanese TIG welded “Ritcheys.” The Fisher brand did come into existence until the end of 1983. 13) 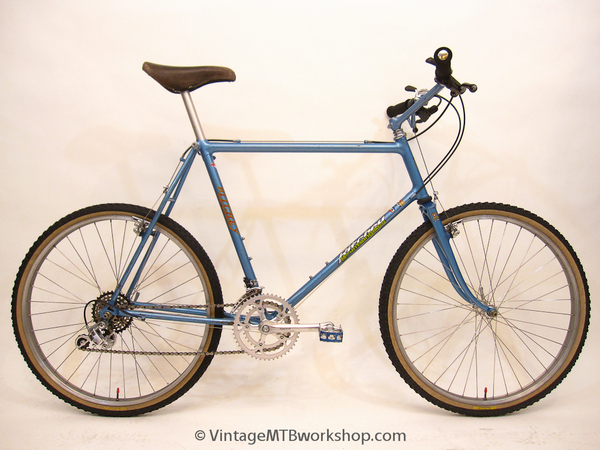 Ritchey found other venues to sell bikes, including the Palo Alto Bike shop, where Ritchey originally sold his road bikes. Meanwhile, the bikes are now called the Commando, Timber Comp and Annapurna. 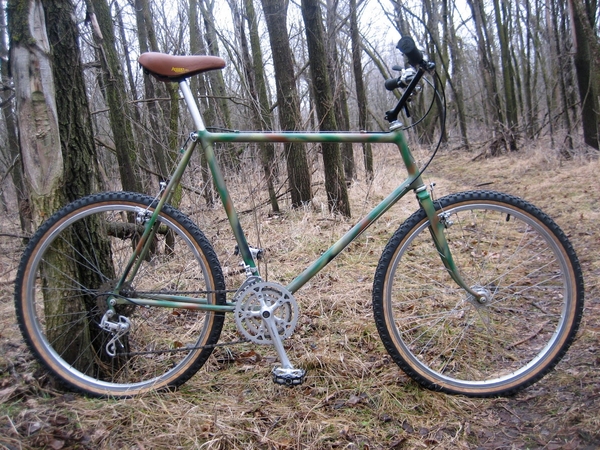 The pinnacle of fillet brazing, the Annapurna is worth another look. By avoiding the use of lugs and using fillet brazing, Ritchey was allowed to choose the diameter of the tubing and the geometry of each frame, which was required for custom, hand made bicycles. 14). 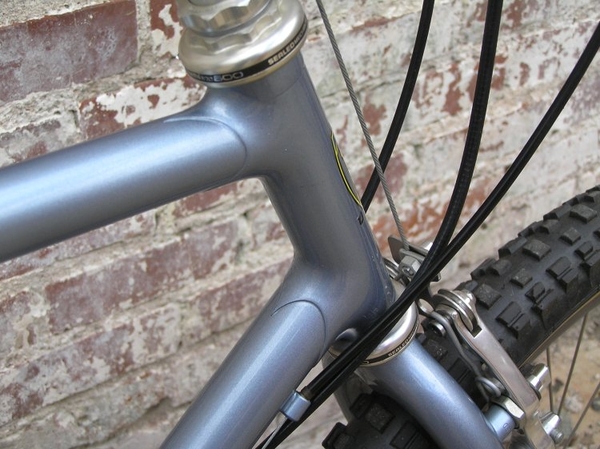 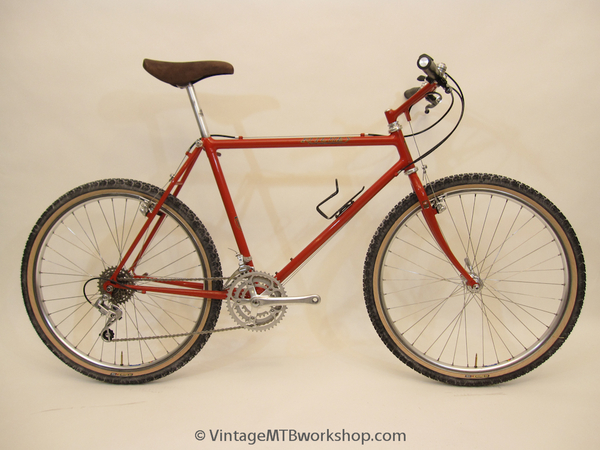 To lower costs and increase production, Ritchey started selling Japanese manufactured Ritcheys starting in 1983, with the introduction of the Rocky Mountain Ritchey, available only in Canada and distributed by Rocky Mountain. Gary Fisher sold the identical bicycle in the US with decals reading Montare MountainBikes with no mention of either Fisher or Ritchey. In 1986, Ritchey made TIG welded Aspens generally available. The quality was very good and the bikes kept the Ritchey touch.

After more than two years of design, research, and testing, RITCHEY Mountain Bicycles are becoming more affordable than ever. The ASPEN is the first in a series of performance TIG welded bicycles designed to give you maximum value. 1986 Ritchey Catalog 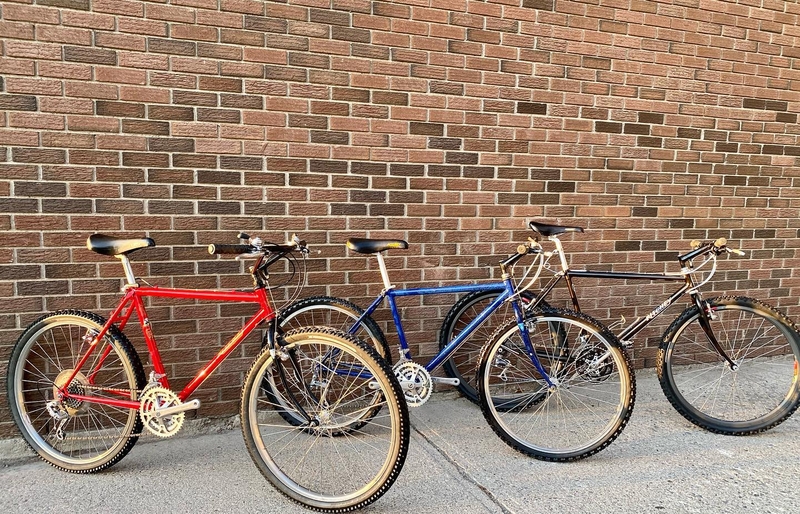 Canadian Trio of Ritcheys: one lugged, one TIG welded, and one fillet brazed.
facebook